This renowned series stands as the largest single body of work on the anatomy, behavior and potentials of the spirit of Man ever assembled, providing the very fundamentals which underlie the route to Operating Thetan. Here it is in complete detail—the thetan’s relationship to the creation, maintenance and destruction of universes. In just those terms, here is the anatomy of matter, energy, space and time, and postulating universes into existence. Here, too, is the thetan’s fall from whole track abilities and the universal lawsby which they are restored. In short, here is L. Ron Hubbard’s codification of the upper echelon of theta beingness and behavior. Lecture after lecture fully expands every concept of the course text, Scientology 8-8008, providing the total scope of you in native state. Includes accompanying reproductions of the original 54 LRH hand-drawn lecture charts.

More About The Philadelphia Doctorate Course

What can a thetan do? Now, we’ll say a Cleared Theta Clear. You couldn’t put down such a goal, because that’s the postulated, outer-line, unattainable absolute. Probably anything we understand it to be is probably attainable already, but what is the outermost limit of it? Lord knows. Haven’t got any idea and you haven’t either. —L. Ron Hubbard

Throughout history, mysticism, philosophy and religion have postulated the existence of the human soul or spirit. In Eastern thought, an individual worked to attain a state of personal enlightenment, free from the material world. Christianity itself was based on the hope that the spirit of Man could transcend death.

Yet despite Man’s theories and hope, he had no proof. And in our modern era, where the rationality of science became preeminent, the very existence of the soul came into question. After all, no one had seen it, measured its dimensions or monitored its energy output.

And so Man doubted. And the human spirit became a thing of superstition, of mysticism, of faith. And the new priests of materialism could dictate that Man’s hopes, dreams, creativity and ethics were simply the product of chemical interactions in the brain.

It was into this world that L. Ron Hubbard stepped—and not lightly.

Trained both in the spiritualism of the East and the uncompromising practicality of the West, he dedicated himself at an early age to finding out the truth of exactly what Man was—whatever that truth might be.

His relentless research in Dianetics had at last unlocked the secrets of the human mind. The phenomena of mental image pictures and their hidden impact on Man had been tested and documented in case after case. Yet still questions remained, pieces of the puzzle that did not fit into the overall picture.

For one thing, in the search for aberrative incidents, preclears sometimes slipped into past lives. And, perhaps even more surprising, the aberrations then resolved with fast and dramatic results.

In his landmark 1951 book Science of Survival, L. Ron Hubbard postulated a life force, which he designated by the Greek letter theta, as a type of energy different from the physical universe of matter, energy, space and time, or MEST. Following this, he began intensive research into the exact nature and potentials of this life force, not through belief or faith, but through strict scientific induction. Mr. Hubbard said of this search:

Key to his research was finding a way to quantitatively measure mental and spiritual phenomena, which only became possible with his development of the first electropsychometer, or E-Meter, an instrument sensitive enough to detect minute fluctuations in resistance caused by mental image pictures. Armed with this research tool, he began to track that most elusive of entities, the spirit of Man. He later noted:

“As soon as this instrument was turned loose on the problem, the problem ceased to exist. By adding up and checking probabilities on scores of persons, the character, extent and content of the whole track were mapped.”

This research revealed that both the age and the potentials of the spirit had been vastly underestimated—as had the complexity and viciousness of the incidents which had aberrated and trapped the being in a body. With whole track recall stretching back into trillions of years, the number of aberrative incidents to be run stretched into the multibillions. Attempting to address these with Dianetics engram running would be a daunting task. So Ron began looking at the problem from a different angle: why do such facsimiles stick to a spiritual being in the first place? Could the isolated parts of Man—spirit, mind, body—be pried apart from each other?

Testing revealed that the separation of the spirit from the body was a surprisingly simple process. It could be accomplished, in about 50 percent of the cases, with the precise command to “Be three feet back of your head.”

With this, in one pivotal moment, L. Ron Hubbard isolated the human spirit, not as an entity or force separate from the individual, not as a “soul” that one “sent to heaven,” but as the personality and beingness which actually is the individual and is aware of being aware. This theta being, or thetan, he found, is immortal and is possessed of capabilities well in excess of those hitherto predicted for Man.

By exteriorizing the thetan from the body, the long-sought goal of religion—spiritual existence independent of the body—had been accomplished, rationally and systematically.

This exterior state, however, proved to be unstable, as the factors that aberrated the being were still there to trap him. At the London Lectures (Source of Life Energy) in November 1952, L. Ron Hubbard told students,

In sum, an Operating Thetan.

Bridging from Homo sapiens to the state of Operating Thetan, or OT, required a firm foundation of knowledge—both of one’s own spiritual abilities and the anatomy of entrapment.

Accordingly, in late 1952, Mr. Hubbard began preparations for a comprehensive course, commencing in Philadelphia on 1 December 1952.

In his letter to the Hubbard Foundation of Philadelphia, he committed himself to an extensive lecturing schedule to cover the breadth and scope of this material, up to 5 lectures a day for a total of 45 lecture and demonstration hours. In fact, he would well exceed even this, giving a total of 62 lectures over an 18-day period, with 14 supplemental lectures given the following January in London.

As the textbook for the course, L. Ron Hubbard wrote Scientology 8-8008. The numbers in the title encapsulated his goal:

“The original definition of Scientology 8-8008 was the attainment of infinity (8) by the reduction of the apparent infinity (8) and power of the MEST universe to a zero (0) for himself, and the increase of the apparent zero (0) of one’s own universe to an infinity (8) for oneself. …It can be seen that infinity stood upright makes the number eight. Thus, Scientology 8-8008 is not just another number, but serves to fix into the mind of the individual a route by which he can rehabilitate himself, his abilities, his ethics and his goals.”

Knowing that the information he was about to deliver would need to be disseminated from Philadelphia to the rest of the world, rapidly and without abridgement or alteration, he also arranged for the lectures to be professionally recorded. One of the Philadelphia Foundation students was also a recording engineer for RCA and provided then-state-of-the-art recorders and microphones to make what would be the first-ever high-fidelity tapes of his lectures.

It all culminated on December 1, 1952, when Mr. Hubbard arrived in Philadelphia, the first manuscript copy of Scientology 8-8008 in hand. The thirty-eight selected students eagerly crowded into the course room at the Foundation offices at 237 North 16th Street in downtown Philadelphia. As one student recalls, “None of us, even those who’d heard him lecture many times in Wichita and Phoenix, were prepared for the fantastic pyrotechnics of the evenings.”

In his opening address, L. Ron Hubbard told them:

“I don’t think this subject has ever been taught here on Earth before. There have been some wild subjects taught here…but no subject as wild as this.”

And so Mr. Hubbard proceeded to lay out, in detail, the results of his research into the nature, abilities, potentials and capacities of the thetan.

The scope of the material was vast, encompassing the entire range of human and spiritual activity. He described in detail the relationship of a thetan to a body and exactly how a body is controlled and run by a thetan using energy flows and motor controls. But even more fundamental, he explained why a thetan has a body in the first place and how, step by step, the spirit got attracted to, interested in and finally dependent on a body.

In lecture after lecture, he detailed the thetan’s relationship to the material universe of matter, energy, space and time while further revealing a gradient scale of beingness, from the lowest state of being completely in agreement with and controlled by the MEST universe, to the highest states where a being creates his own universe.

By the end of the course, Mr. Hubbard had delivered a total of 62 lectures, each lecture an hour in duration, with a total of 54 accompanying charts, hand drawn during the course of these lectures. The following month, another 14 supplementary lectures were delivered in London, making 76 lectures and comprising a monumental body of knowledge on the full potentials of a thetan.

The Philadelphia Doctorate Course and its text, Scientology 8-8008, stand today as the largest single body of work on the identity, character and potentials of the spirit of Man ever assembled. L. Ron Hubbard was to devote the next thirty-four years to the full development of The Bridge to Total Freedom, providing the step-by-step route anyone could travel to achieve their full spiritual potentials described in this course—Operating Thetan. 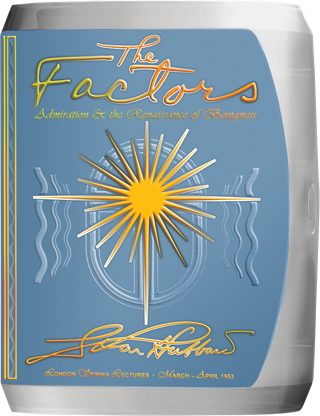 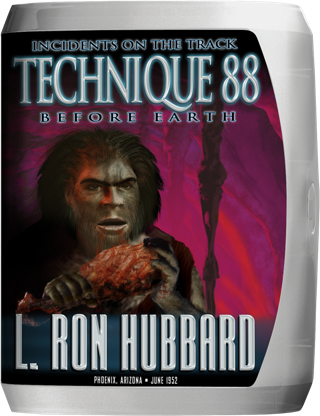 Technique 88: Incidents on the Track Before Earth 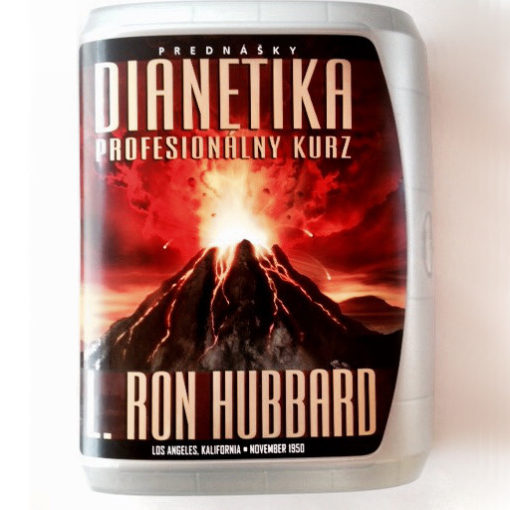 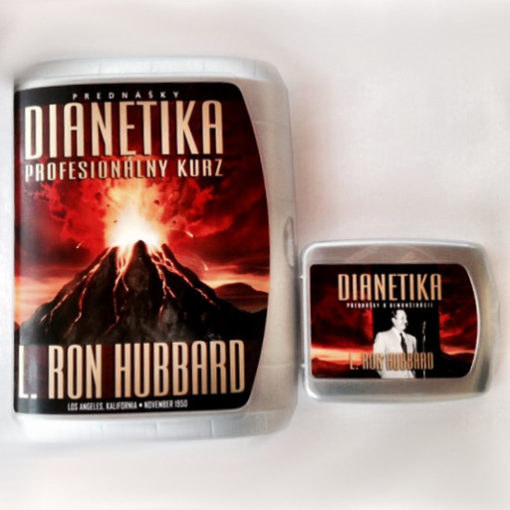